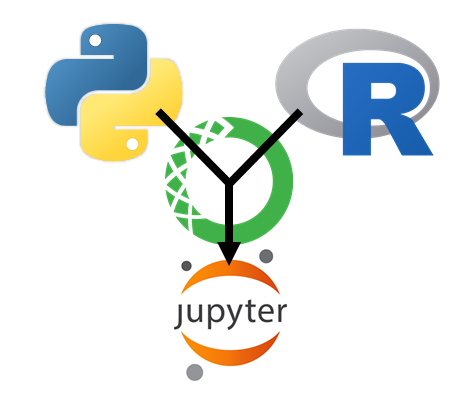 after installing the anaconda distribution you can run the navigator app, which allows you to create environments and manage the installed packages. As always with these tools some commands will only work in the command line.

that contains python and R, we are specifiying r-base because conda will install the microsoft R distribution by default.

will add your environment to your command line

will remove your environment from your command line

anaconda not only contains packages but also apps and other programs. It also contains a set of compilers. For licensing reasons the MacOS SDK cannot be included and needs to be installed seperately as explained here. MacOS SDK can be downloaded here I suggest to download the version that matches the version number of your installed macOS.

Add the following code to your conda_build_config.yaml in your HOME directory (create new file if not present).

Add a channel to the bottom of the list

You want to make sure that the defaults channels rank high thus I recommend appending all new channels.

Add a channel to the top of the list

here you want to add your own channel containing your anaconda builds.

we can install apps such as Rstudio, pip, etc (see anaconda launcher with the same synthax)

do not use R; install.packages(), packages installed that way cannot be tracked

This will be mostly required for R packages that cannot be found on anaconda ressources which unfortunately is true for most of the packages. Managing your R packages with anaconda takes a long time to set up if you already start with a large set of package requirements and can be efficient if you gradually build it up as you go. However you will not be cross platform compatible. You will have to more or less go through the same iterative steps on each platform you want to be compatible with. The reason is that R packages containing C++ or Fortran code need different compilers depending on the operating system that you use. Some of these compilers are not referenced directly but they reference to another R package which is at the base of the dependency trail. There is the option of converting you package builds compiled on one platform to another which will work for the majority of the packages but not for all.

anaconda will automatically checkout out the master branch with the latest release tag of packages from github. Often repository owners do not assign release tags or only if a major version increment has been made. Therefore it is best to fork the repository to a personal public github account and then apply any missing release tags.

R packages from github do not have to pass any quality checks as they need to for being uploaded to CRAN. Therefore it can happen that not all dependencies from the NAMESPACE file are also listed in the DESCRIPTION file. In such a case the testing environment for creating a conda build will not be sufficient.

Exporting an environment to .yml

activate the environment that you want to export. It will save a .yml file into the current working directory

Build environment based on .yml file

Convert packages to other formats on linux

This did only work for me when trying to convert from OS-64 to linux-64 for packages that did not need compilation.

Change to your conda-bld directory in the shell